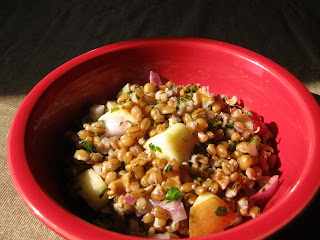 Hard winter wheat is one of our favorite grains here on the farm, especially since it can be grown in the state of Washington! And thanks to Nash's Organics right now we have a large supply of it. Hard winter wheat, when cooked, is characterized by it's soft, chewy texture and nut-like flavor. It has more gluten protein then other grains and is used to make flour and pasta. Use it as you would other grains. If you are looking for a new and creative idea, below is an excellent Wheat Berry Waldorf Salad that uses crisp apples, nuts, cinnamon, and other spices for a delicious mid-winter treat!
2 cups uncooked wheat berries
1 cup chopped walnuts
2 medium apples, cored and chopped
1 cup seedless raisins
1 cup finely chopped parsley
1/4 cup apple cider vinegar
1/2 cup apple juice
1/2 teaspoon salt
1/2 teaspoon pepper
1/2 teaspoon ground nutmeg
1/2 teaspoon ground cinnamon
3 tablespoons extra virgin olive oil
2 tablespoons lemon juice
Put wheat berries into a large bowl, cover with at least 2 inches of water and set aside to let soak for 6 to 8 hours or overnight. Drain well. Put 7 cups water into a medium pot and bring to a boil. Add wheat berries, reduce heat and simmer, uncovered, for about 50 minutes, or until cooked through. (Wheat berries retain a firm, chewy texture when cooked.) Drain and set aside to let cool. Transfer wheat berries to a large bowl. Add walnuts, apples, raisins, parsley, vinegar, apple juice, salt, pepper, nutmeg, cinnamon, olive oil and lemon juice and mix everything together thoroughly.
Posted by Terry's Berries Farm at 10:39 AM No comments:

In a recent interview I read with farmer Andrew Stout from Full Circle Farms, Ozette potatoes are described as "very earthy and nutty and they have that great fluff-puff texture."
Well, I'm sold.
Ozettes are type of rare, heirloom potato whose seeds were brought from Peru to the Olympic Peninsula by Spanish explorers in 1791. Since then they have been grown by the Makah Nation and have only recently been reclaimed by slow food and heirloom seeds enthusiasts. We can certainly all enjoy them as they make awesome potato salads, such as the one listed below. Any old fingerling potato will do, however, perhaps even a few purple potatoes for color in this recipe. Enjoy!
4 lbs Makah Ozette, or fingerling potatoes, halved if large
12 oz red pearl onions
2 tbsp unsalted butter, melted
2 tbsp extra virgin olive oil
1 1/4 tbsp kosher salt, divided
1/2 tsp plus 1/8 tsp pepper, divided
1/4 cup each creme fraiche and heavy cream
1 bunch chives, chopped (1/4 cup)
4 oz bacon, cooked until crisp, then finely chopped
1. Preheat oven to 400 degrees. Put potatoes in a pot of salted water. Bring to a boil, then simmer until just tender, 10 to 15 minutes. Drain and put in a large bowl. Meanwhile, blanch onions in boiling water 2 minutes, rinse to cool, then peel.
2. Add onions, butter, oil, 1 tsp salt, and 1/2 tsp pepper to potatoes and stir. Divide between 2 rimmed baking sheets and bake, stirring occasionally, until potatoes are tender and golden brown with crisp edges, about 25 minutes. Transfer to a shallow serving dish.
3. Beat creme fraiche and heavy cream in a bowl with an electric mixer until stiff peaks for. Stir in chives, bacon, and remaining 1/4 tsp salt and 1/8 tsp pepper.
4. Top potatoes with bacon cream and gently stir to coat.
Posted by Terry's Berries Farm at 10:52 AM No comments:

Last week for brussels sprouts here at the farm! Don't shy away from them because of a few less than perfect outer leaves, simply peel them away and continue to prepare as desired. They are really quite good this time of year, after the frosts.
Many people have grown up thinking they hated brussels sprouts, but brussels sprouts that have been previously frozen or that are simply boiled hardly highlight this brassica's potential. Check out the recipe below for a simple yet delicious way to change even the most convinced brussels sprouts loathing personality that they are worth another try.
24 small brussels sprouts
1 tablespoon extra-virgin olive oil, plus more for rubbing
fine-grain sea salt and freshly ground black pepper
1/4 cup grated cheese of your choice
Wash the brussels sprouts well. Trip the stem ends and remove any raggy outer leaves. Cut in half from stem to top and toss with olive oil. Heat 1 tablespoon of olive oil in your largest skillet over medium heat. Don't overheat the skillet, or the outsies of the brussels sprouts will cook too quickly. Place the brussels sprouts in the pan flat side down (single-layer), sprinkle with a couple pinches of salt, cover, and cook for roughly 5 minutes; the bottoms of the sprouts should only show a hint of browning. Cut into a brussel sprout to gauge whether they're tender throughout. If not, cover and cook for a few more minutes. Once tender, uncover, turn up the heat, and cook until the flat sides are deep brown and carmelized. Use a metal spatula to toss them once or twice to get some browning on the rounded side. Season wit more salt, a few grinds of pepper, and a dusting of grated cheese. Serve immediately.
Posted by Terry's Berries Farm at 12:46 PM No comments:

Terry's Berries Farm
Terry's Berries is a 25 acre diversified organic farm in the Puyallup River Valley. We are committed to growing organically, preserving farmland, and educating our community about good food. Eating locally and seasonally benefits our personal health as well as that of the local economy and environment. This is the place to go for tasty seasonal recipe ideas from vegetables and fruits grown here in the Pacific Northwest!